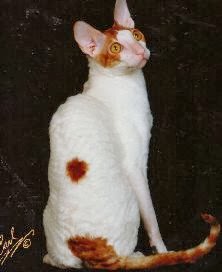 FurryDance Bossiney (above, left) was our first Regional winning show cat, but not the last. He was The Cat Fanciers' Association's Fourteenth Best Cat in Premiership in the Northwest Region for the 1993-1994 show season. Sadly, we lost him in 2005. See Bo's memorial page here:
In Memoriam

Sister of the Boss 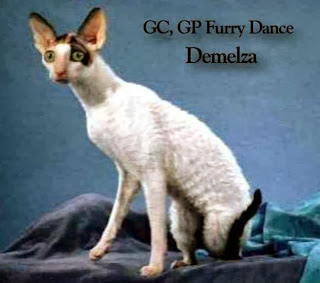 FurryDance Demelza ( "Demi") is Bo's sister, and she was as beautiful as he was handsome. She was a winner in her own right, achieving the Title of Grand Champion and Grand Premier. 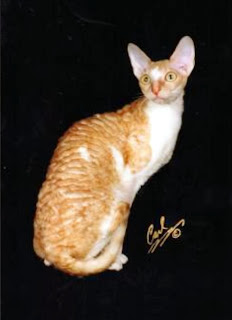 Fenway Nanjizal Bay of FurryDance ("Nani") while not bred by FurryDance Cattery, had a very successful show career both before and after she was spayed. She achieved her Grand Premier title in one show, and went on to win The Cat Fanciers' Association's Tenth Best Cat in Premiership in the Northwest Region for the 1997-1998 show season. 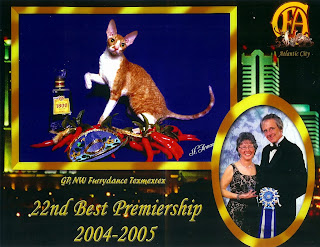 Our First National Winner!
This is GP, NW FurryDance Texmexrex ("Nacho"), The Cat Fanciers Association's Twenty-second Best Cat in Premiership for the 2004-2005 show season. We were so proud of him!

Teri and her Stylish Cats
I was a veterinary healthcare professional since I was in my 20's. I retired in 2019. I currently share my life with 2 Cornish Rex cats. They force me get up in the morning. They make me sleep in on the weekends. They cat nap with me. Life is Good!