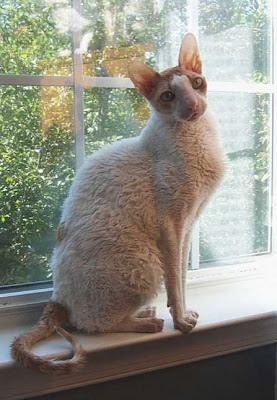 On August 21, 1990, a little boy kitten was born, destined to become a cat who made an impression on everyone who met him. 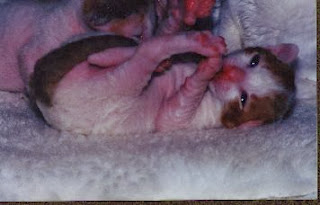 Furrydance Bossiney was our first Regional winning show cat, earning the title of The Cat Fanciers' Association's Fourteenth Best Cat in Premiership in the Northwest Region for the 1993-1994 show season. At his last cat show, in April 2005, at 14 years of age, he was still star. Many judges commented on his wonderful condition, his sweet temperament and his wonderful coat, thick and wavy even in his senior years, which is rare for a Cornish Rex! Even more amazingly, Bo was recognized by a judge, who had not seen him in 12 years, but still remembered him out of the thousands of cats she had seen. 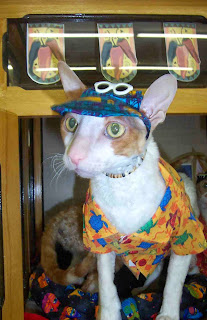 Although he never fathered kittens, Bo was a wise father figure to the many young ones he watched over, accepting the tail nibbles (and other signs of affection more appropriate to a mother cat) that the kittens tried with him. And he was the love of Teri's life ...until she met Mike. When Mike came along, Bo had to share her, but being the special cat he was, he graciously and lovingly wrapped his heart around Mike, too. 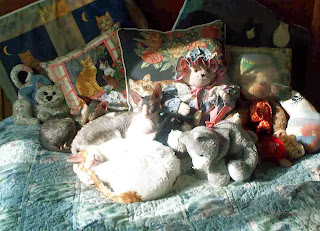 Early in his life, Bo was diagnosed with a serious heart defect, HCM, and survived an episode of congestive heart failure. And when he was 10 years old, he developed renal failure. But Bo was strong, and he went on to enjoy a wonderful life for another five years under Teri's wonderful care.

Sadly, on June 29th, 2005, Bo's heart defect took him from us. We will miss him forever, but we will be eternally grateful to have been there with him to kiss his sweet face one last time. The love we gave him was reflected in the sweet love he gave to us, and we will never lose that feeling. With sadness in our hearts we said farewell but not goodbye.
Mike Thorsteinson Memorial
No less remarkable than Bo, Mike, the other love of my life, passed away in February, 2007. You can visit his memorial at Mike Thorsteinson Memorial Blog. Feel free to leave a message if you'd like.

Teri and her Stylish Cats
I was a veterinary healthcare professional since I was in my 20's. I retired in 2019. I currently share my life with 2 Cornish Rex cats. They force me get up in the morning. They make me sleep in on the weekends. They cat nap with me. Life is Good!